"Archbishop Fulton J. Sheen: Servant of All." No truer words have ever been written. For decades, Fulton Sheen served as a shining example of what it means to serve God. His television show, "Life is Worth Living," reached 30 million viewers a week, and his words were captured in over 100 publications. His inspiration came not just from his teachings, however. Millions were influenced by the way he lived and by witnessing his personal relationship with God.

This film, "Archbishop Fulton J. Sheen: Servant of All," introduces this beloved priest to a new generation — a generation that desperately needs this shining example of what it means to serve God. His messages remain as relevant and powerful today as they were nearly a half-century ago. Through the stories of those who knew him, viewers are reminded of his life and works. He lives on in the memories of those whose lives he forever changed. 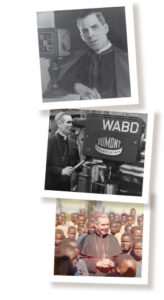 tholic faith than the beloved Archbishop Fulton J. Sheen. Beginning in 1930 and for 22 years thereafter, his radio show, "The Catholic Hour," reached millions of Catholics and non-Catholics alike. Then from 1951 to 1957, his groundbreaking television program, "Life is Worth Living," reached an estimated 30 million viewers each week. Archbishop Sheen touched so many lives that he would receive as many as 25,000 letters a day.

When you consider that he wrote 66 books, 62 booklets and thousands of letters, served as editor of two magazines for 16 years, and was a syndicated columnist in the secular press for 30 years, there is a reason why the Jesuit magazine "America" once called him "the greatest evangelizer in the history of the Catholic Church of the United States."

His impact as National Director for the Propagation of the Faith was equally important to the Church. For 16 years, he led this effort for 129 dioceses throughout the United States and influenced the lives of tens of millions of people all over the world.

Even today, nearly 30 years after his death, he is still quoted widely. His books are still read and his original broadcasts are viewed by millions in over 177 countries on the Eternal World Television Network.

In 2002, the Congregation for the Causes of the Saints officially opened the Cause for Archbishop Sheen's Canonization and conferred on him the title Servant of God.

As Father Andrew Apostoli has said, "Our 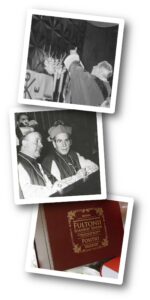 Church needs a hero of the faith like Archbishop Fulton Sheen, and maybe now more than ever. We can't let his voice go silent; there's too much at stake."

The film "Archbishop Fulton J. Sheen: Servant of All" was developed by The Archbishop Fulton John Sheen Foundation to ensure this hero lives on to inspire new generations. The Foundation's mission is to make known the life, works and thoughts of Archbishop Sheen — and this film is perhaps its most important effort in leading others to a deeper relationship with God and His Church using Sheen's example. The goal of the film is to fill viewers with the same zeal for the Church that Archbishop Sheen himself experienced.

"Archbishop Fulton J. Sheen: Servant of All" is a one-hour documentary that tells the story of Sheen and the tremendous impact he had on individuals, the Catholic community, the American public, and the world. Divided into five main sections, the film uses still images, video footage and interviews with those who knew Sheen to tell the story of this remarkable man, gifted teacher, missionary, priest, and loyal son of the Church.

years, from birth to ordination, including his early academic and debating successes, which set the stage for his accomplishments to come. The section ends with his ordination and lifelong commitment to the Holy Hour and the Eucharist.

Teaching. Begins with his return to Peoria, Ill., and his service as a parish priest. Covers his years as a professor and author, the beginnings of his missionary focus as he traveled the world, and the start of his media career with the Catholic Hour radio show.

Preaching. Tells the story of Sheen as director of the Propagation of the Faith and ends with his move to Rochester, N.Y. This section also focuses on the impact of his television show, and his humility in the face of unprecedented popularity. Viewers learn how his speaking style and power to communicate impacted others, from individuals to the world.

Giving. Covers his focus on giving — what he did with his incredible wealth from royalties and donations and his dedication to giving both money and time to the less fortunate. Also discusses the impact of his writings and his participation in Vatican II.

Suffering. Tells the story of Sheen’s illness, loss of popularity and his reaction to a changing world. Also focuses on his final push to promote the priesthood, his dwindling health and the culmination of his life with an embrace by the Pope.

Hundreds of hours of interviews were conducted to capture the stories of those who knew Sheen and/or were impacted by his life, his writings and his teachings. Participants included:

This film would not have been possible without the support and generosity of so many. Thank you to the Catholic Diocese of Peoria for its vision and commitment, and to countless others who made financial gifts, shared their stories and donated their time to this project.