On the 40th anniversary of Sheen's death, Bishop Jenky decided to make known this special novena trusting in the "power of prayer" to move heaven as well as instill hope to all those saddened and disappointed by the delay announced so close to the expected Beatification.

The nine-day novena began, December 12, the Feast Day of Our Lady of Guadalupe and includes daily meditations on reflections from Fulton Sheen.  The novena is available in English and Spanish and is being carried on several Catholic television networks as well as social media sites.

Bishop Jenky asks the many supporters of Archbishop Sheen to give themselves over to prayer, which is always the best way to support the Cause.  Together, we seek God’s will in the ultimate judgment of the Apostolic See.

All are encouraged to continue supporting the Cause for Canonization of Sheen by making a donation to the Fulton J. Sheen Foundation through the link above.

The Actions of Rochester Diocese: Caution or Sabotage?
December 7, 2019

All are invited to visit the Fulton J. Sheen Museum or his tomb at the Cathedral of St. Mary of the Immaculate Conception.  See schedule below.

EXCEPTIONS TO THE REGULAR TOMB SCHEDULE

Looking for details on media and Press Releases? Get all the information you need here.

Looking for details on media and Press Releases? Get all the information you need here.

The Cause for the Beatification and Canonization of Fulton Sheen is entirely supported by donations to the Fulton Sheen Foundation which promotes the Cause.

Your past donations have supported the efforts of the Foundation to promote the Cause.  Your donations have paid for the expenses in the Diocesan phase of the inquiry into the life and virtues of Fulton Sheen, as well as the investigation of the alleged miracles attributed to his intercession.  Even more, your generosity has also supported the Cause through the Roman phase as our Postulator has worked diligently with the Congregation of the Causes of Saints.
These efforts have successfully brought us to this moment in which we soon anticipate the Beatification of our beloved Servant of God.
There is still much work to be done.  Your donations are necessary to provide for the Beatification Ceremony of the Venerable Servant of God.  Even after Beatification, the work of the Foundation continues as we pray for another miracle for the future Canonization of Archbishop Sheen.

Donations of any amount are appreciated.

If you would like to make a donation, send check (USA currency only) payable to:

"The greatest love story of all time is contained in a tiny white host." Visit the website of the
Catholic Diocese of Peoria 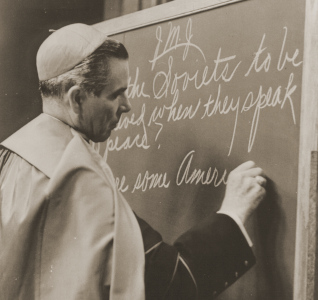 Ticket requests for the Beatification may be submitted beginning on Friday, November 22nd by following this link. 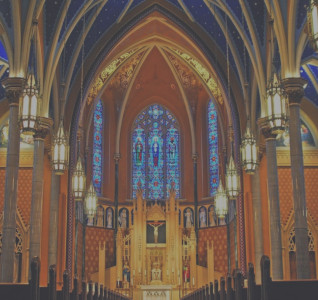 Learn more about the Cathedral of St. Mary in Peoria, IL.