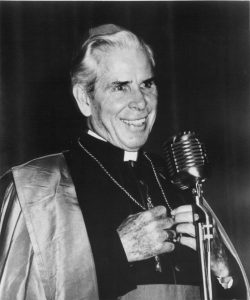 Archbishop Sheen, best known for his popularly televised and syndicated television program, Life is Worth Living, is held today as one of Catholicism’s most widely recognized figures of the twentieth century.

Fulton John Sheen, born May 8, 1895 in El Paso, Illinois and was the eldest of four sons of Newton and Delia (Fulton) Sheen.  He was raised and educated in the Roman Catholic faith. Originally named Peter John Sheen, he came to be known as a young boy by his mother's maiden name, Fulton. After his baptism, his mother dedicated him to the Blessed Virgin Mary, a dedication he himself renewed at his First Holy Communion.  Over the course of many dedicated, steadfast years, he was ordained a priest of the Diocese of Peoria at St. Mary’s Cathedral in Peoria, IL on September 20, 1919.

Following his ordination, Sheen moved overseas to further his education, and earned a doctorate in Philosophy from The Catholic University of Louvain in Belgium in 1923. That same year, he received the Cardinal Mercier Prize for International Philosophy, becoming the first ever American to earn this distinction.

Upon returning to America after varied and extensive work throughout Europe, Sheen continued to preach, as well as teach theology and philosophy at the Catholic University of America in Washington DC from 1927 until 1950.

Starting in 1930, after just eleven years of priesthood, Sheen hosted a weekly Sunday night radio broadcast called The Catholic Hour. This broadcast captured many devoted listeners, reportedly drawing an audience of four million people every week for two decades. In 1946 he joined the Board of Directors of the Catholic Medical Mission Board (CMMB), a position he held for the next 30 years.

In 1950, he became the National Director of the Society for the Propagation of the Faith, raising money to support the missions. During the 16 years that he held this position, he raised millions of dollars to support the missionary activity of the Church. These efforts influenced tens of millions of people all over the world, bringing them to know Christ and his Church. In addition, his own preaching and personal example brought about many converts to Catholicism. 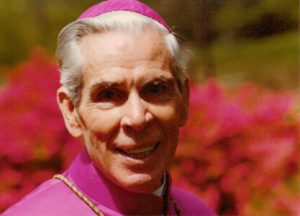 In 1951, Sheen was appointed Auxiliary Bishop of the Archdiocese of New York. That same year, Sheen moved from his weekly radio broadcast to hosting the Catholic television program, Life is Worth Living. This unpaid, unscripted show aired every Tuesday evening at 8pm for six years. In the beginning stages of the show, only three television stations originally broadcast it. However, that number jumped to fifteen in less than two months after Life and Time magazine ran a feature story on Sheen. The magazine piece caused Sheen’s popularity to blossom. He began receiving fan mail at a rate of 8,500 letters per week and juggling four times as many ticket requests that could be fulfilled. He even became the first to conduct a religious service ever broadcast on TV.

Over the course of the show, Sheen’s Life is Worth Living competed for airtime with popular television stars such as Frank Sinatra and Milton Berle. Sheen's show held its own, and in 1953, just two years after its debut, he won an Emmy Award for "Most Outstanding Television Personality." Fulton Sheen credited the Gospel writers - Matthew, Mark, Luke, and John - for their valuable contribution to his success. This television show ran until 1957, boasting as many as 30 million weekly viewers.

In the fall of 1966, Sheen moved upstate, where he was appointed Bishop of Rochester, New York. During this time, Bishop Sheen hosted another television series, The Fulton Sheen Program, running from 1961 to 1968 that closely modeled the Life is Worth Living series.

After nearly three years as Bishop of Rochester, Fulton Sheen resigned and was appointed the Archbishop of Titular See of Newport Wales by Pope Paul VI. This new appointment allowed Sheen the flexibility to continue preaching.

In 1979 Fulton John Sheen received his greatest accolade when Pope John Paul II embraced him at St. Patrick's Cathedral in New York City. The Holy Father said to him, "You have written and spoken well of the Lord Jesus. You are a loyal son of the Church." With that last acknowledgment, Fulton Sheen passed into eternal life just two months later on December 9, 1979. 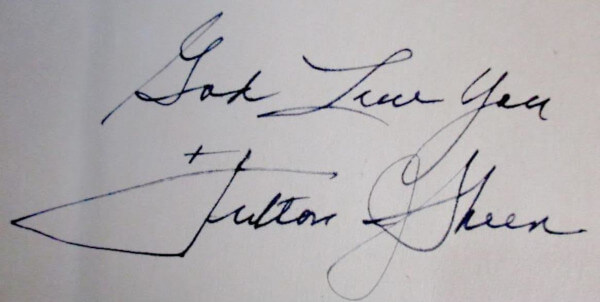 His contributions to the Catholic Church are numerous and varied, ranging from educating in classrooms, churches, and homes, to preaching over a nationally publicized radio show, and two television programs, as well as penning over 50 written works. Bishop Fulton J. Sheen had a gift for communicating the Word of God in the most pure, simple way. His strong background in philosophy helped him to relate to all of his followers in a highly personalized manner. His timeless messages continue to have great relevance today. He inspires each of us to live a God-centered life with the joy and love that God intended.

Born on May 8th in El Paso, Illinois, Archbishop Sheen was the eldest of four sons of Newton and Delia (Fulton) Sheen. Though he was baptized Peter John, throughout his life he was known by his mother’s maiden name, Fulton. After his baptism, his mother dedicated him to the Blessed Virgin Mary, a dedication he himself renewed at his First Holy Communion. He lived with his family for a time on a farm outside of Peoria, Illinois.

His family moved to Peoria in order that young Fulton could enroll in St. Mary’s Cathedral School. He often served at Mass for Bishop Spalding at the Cathedral of St. Mary of the Immaculate Conception.

He attended High School at the Spalding Institute in Peoria staffed by the Brothers of Mary.

He attended St. Viator’s College in Bourbonnais, Illinois, and after graduation went to St. Paul’s Seminary in St. Paul, Minnesota.

On September 20th, Fulton Sheen was ordained a “Priest forever” for the Diocese of Peoria. At the time of his Priestly Ordination, he made his famous promise to make a daily Eucharistic Holy Hour, which he kept faithfully for the rest of his life.

After ordination, he began two years of postgraduate studies in Theology at the Catholic University in Washington DC, and another year at the University of Louvain in Belgium.

He attended further theological classes at the Sorbonne in Paris and the Angelicum in Rome.

He returned to the University of Louvain where he became the first American to receive the Cardinal Mercier Prize for International Philosophy as well as attaining the Aggrege degree with outstanding distinction.

He spent 9 months working in St. Patrick’s, an inner city parish in Peoria.

He began teaching Theology, then Philosophy and Religion at the Catholic University in Washington DC. He was to remain there until 1950. He also began local radio broadcasting in the New York area.

He began his national radio broadcast, The Catholic Hour, which continued for some 22 years, reaching an estimated four million listeners.

He joined the Board of Directors of the Catholic Medical Mission Board (CMMB).

He became the National Director of the Society for the Propagation of the Faith, supervising 129 diocesan directors throughout the country. He held this position until 1966.

He was consecrated a Bishop in Rome by Adeodato Giovanni Cardinal Piazza in the Church of Saints John & Paul on June 11, 1951. Pope Pius XII named him titular Bishop of Caeseropolis. In the Fall of 1951 he began his famous television series entitled, Life is Worth Living. It eventually reached an estimated 30 million viewers each week. He won an Emmy Award for Most Outstanding Television Personality in 1953. His series ran with great success until 1957.

He attended all of the Vatican Council sessions in Rome, ending in 1965.

He was named Bishop of the Diocese of Rochester, New York on October 21st.

He resigned as Bishop of Rochester. As he said, "I am not retiring, only retreading." Pope Paul VI named him Archbishop of the Titular See of Newport (Wales). The Archbishop remained relatively active, spending the last years of his life chiefly in writing and preaching.

On October 2nd, Pope John Paul II embraced him in St. Patrick’s Cathedral. The Holy Father said to him, "You have written and spoken well of the Lord Jesus. You are a loyal son of the Church!" On December 9th God called the Archbishop from this life to his eternal reward.

Bishop Daniel Jenky, CSC, of the Diocese of Peoria, opened the Cause for the Beatification and Canonization of the Servant of God Fulton Sheen.

The Diocesan Inquiry of the life and virtues of the Servant of God was completed by Msgr. Richard Soseman. During the liturgy of the special mass which was held at the Cathedral of St. Mary in Peoria, Illinois, the final seal was placed on several file boxes containing copies of Archbishop Sheen’s writings as well as thousands of pages of testimony given under oath by witnesses to his personal holiness. Dr. Andrea Ambrosi, Postulator for the Cause, was then commissioned by Bishop Jenky to carry the packages to the Vatican for presentation to the Congregation for the Causes of the Saints.

The investigation into Sheen’s heroic virtue was officially opened in Rome with a ceremony at the offices of the Vatican Congregation for the Causes of Saints.

The Positio (a summation of the life and works of Archbishop Fulton Sheen) was presented to the Holy Father, Pope Benedict XVI by Bishop Daniel R. Jenky, CSC of the Catholic Diocese of Peoria. The Pope metioned to Bishop Jenky that he knew Archbishop Sheen personally and worked with him during Vatican II.

The Diocesan Inquiry into an alleged miracle through the intercession of the Servant of God was completed by Msgr. Jason Gray. The alleged miracle involved the restoration of a stillborn child, James Fulton Engstrom, after 61 minutes without heartbeat or respiration.

A Mass of Thanksgiving was celebrated by Bishop Daniel R. Jenky, CSC, for the declaration of Archbishop Fulton Sheen as Venerable at the Cathedral of St. Mary of the Immaculate Conception in Peoria.

The medical experts in the Congregation of the Causes of Saints unanimously concluded that the alleged miracle attributed to Fulton Sheen was beyond scientific explanation, noting that the child had survived without any cognitive or developmental deficit.

The panel of theologians in the Congregation of the Causes of Saints unanimously concluded that the alleged miracle was attributable to the intercession of Fulton Sheen.

The body of Archbishop Fulton Sheen arrived in Peoria, Illinois at The Cathedral of St. Mary of the Immaculate Conception.  After the rights of the next of kin were vindicated to transfer the mortal remains to Peoria, the Cause was reopened in preparation for the eventual Beatification of the Venerable Servant of God.

The miracle attributed to Sheen was officially recognized by the Holy Father, Pope Francis.